When Funker Vogt was founded in 1995 by Gerrit Thomas and Jens Kästel, nobody could foresee that, within just one year, it would grow into one of the leading electro-acts of today. Originally, it had been envisaged as just one more of Gerrit Thomas's many musical projects; but the project took the world by storm and grew to become GT's main act. 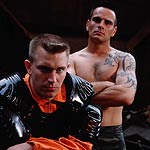 The man who gave the band its name, Funker Vogt is a friend, who was serving as operator/navigator with the German army at that time. This choice of name describes and defines the theme of the project: German army - military - war.

The responsibilities/roles of each member of the band are clearly defined: Gerrit Thomas composes the music, Jens Kästel is the singer. Most of the lyrics are written by Kai Schmidt, with occasional contributions by Jens and Gerrit. In concert Jens and Gerritt are supported by two guests, namely Björn Böttcher (keyboard) and Thomas Kroll (guitar). For three years Kai Schmidt managed the band, when he handed the management over to Repomanagement (KS/BB).

Since 1996 Funker Vogt has published 4 albums, 4 EP's, 5 singles, 1 remix CD and 1 video. In December 2001 the first three albums plus bonus tracks were republished under the label Reporecords. FV managed to reach the top of both the German and the international electro-scene very quickly and has since remained at the top of these charts: where they have been received with much enthusiasm from areas such as Spain, Portugal, Russia, Poland, Denmark, France, Belgium, Holland, Italy, South Africa, Israel, South America and England... FV has also established a sound reputation in the US, where its music is distributed by Metropolis Records.

Next to its creativity, it is the vibrant energy of its live concerts which best characterises the band. This quality has undergone continuous improvement as the size of the band has grown from two to four. Funker Vogt is also known as a complete work, regrouping image, music, lyrics, and stage presence into a unique theme: One of the major characteristics of Funker Vogt's concerts is the martial appearance of the band. Critics describe this experience as a war being presented on stage. 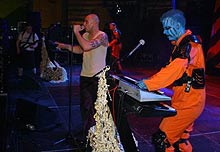 This is an image, deliberately chosen by Funker Vogt. On one hand, it is provocative and hence liable to be misunderstood on a superficial glance. On the other hand, however, this controversial image gives rise to deep-seated associations and creates a strong and consistent link between the fan and the band. The image that is sought combines both the appearance of the band and the contents of the songs. In combination, these two elements preclude all misunderstandings, as there is a clear irony between the drastic militarism presented, which is caricatured during live concerts, and the underlying message. These contradictions emphasise and strengthen the body of the texts.

War and social injustice have become the main topics over the years. These have reached their fullest expression in Funker Vogt's earlier publication: Execution Tracks, and the video accompanying it. Audio and Video present the grotesque cruelties and the tragedy of war, most obviously in such songs as Civil War and Tragic Hero. The group's stance is unambiguously expressed in Fortunes of War and its chorus. War reappears as a topic in the publication which followed, Maschine Zeit, but more allusively as a foil and backdrop to more specific ideas, where a change of musical style accompanies the evolution of these concepts.

While Funker Vogt produced its first album, Thanks for Nothing, with rather elementary and means, they have consistently strived for more complex soundscapes over the course of the following albums, exchanging standardised structures for a richer variety. The band has kept an experimental dimension while using pop influences but sparingly. The last album features something more immediately ear-catching, pointedly including elements of pop, and as a consequence, the album proved a success within the alternative electro-scene.

Survivor: Funker Vogt's new album, Survivor, published in October 2002. The single, Date of Expiration, published in June, serves as a foretaste of what to expect as a sonic direction. It contains the title track plus two new songs. Survivor presents the future in a rather dark scenario, the titular hero being the last of mankind. Furthermore the Survivor is a metaphor for the history of Funker Vogt itself. Despite a few quarrels with some labels and the words of sceptic critics, FV is still alive and kicking, gaining in strength and popularity with each new album. Survivor's story is pictorially presented on the cover and explicitly told in the booklet. The cover presents a talisman or dogtag sinking to the bottom of the sea. The talisman, which belongs to Survivor, also embodies Funker Vogt's logo, symbolizing both the endurance of Survivor and of Funker Vogt. It will last and outlast even the Survivor. Funker Vogt is immortal.

Survivor reappears in the lyrics, where he retells the story of the wars has outlived (This World), of his time as a soldier and its impact (Compulsions), He tells the story of the POWs, which may be allegorically interpreted as the history of the decline and fall of civilization, of his dreams and wishes (Final Thrill), of his discontent with present-day society (Stolen Thoughts), of his search for fulfillment and solace (Faster Live), of his experiences as refugee (Refugees). In Red Queen his stories are rounded off: as in the beginning of the album (Date of Expiration), the Survivor does not narrate his stories, but addresses the listener directly and analyses not his own life but that of the listener. Whether the cap fits or not, is up to every listener to decide.

Musically, the album offers something new, presenting for the first time guitarist Thomas Kroll live. Both Fallen Man and Red Queen profit from this intense use of the guitar. Moreover, the album contains Funker Vogt's first ballad, while some other songs push the envelope of what they have done in the past, adding variety and richness to the established canonical Funker Vogt-style. The band trusts the richness and complexity of the new album will appeal to most, including the harshest critics. 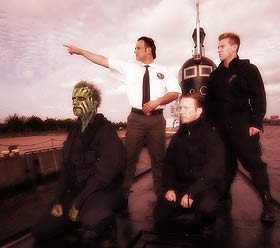 Fallen Hero: After three years of silence, Funker Vogt returns with their new single "Fallen Hero."
With this track, Funker Vogt continues their story of the "Tragic Hero," one of their most successful singles to date. After a short recapitulation, we find out what happened to the hero in the past, present and what may occur in his future. In a sense, the tale of the "Fallen Hero" applied equally well to the band itself. Just like the Fallen Hero, the band returns after a long time of silence to be more actively involved in the music scene.

From a musical point of view, Funker Vogt has evolved with this release. Here they prove to their critics that they can do much more then just distorted vocals and 4/4 beats. The vocals in the songs are supported by their captivating melodies and bombastic drums.

For these first remixes, the band chose two of last year's most successful newcomers, Underwater Pilots and The Birthday Massacre. Other well known bands will be utilized for future remixes. This MCD and their upcoming album "Navigator," are just a taste of what's to come for Funker Vogt's fans.

This MCD will be completed by two exclusive non-album tracks. "Fallen Hero" stands on its own and is much more then just a promotional tool for their upcoming album "Navigator." 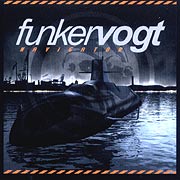 Navigator: Funker Vogt is back with their new album "Navigator." On this newest release, stories of current events ("Friendly Fire," and "Reject"), war and the end of the world ("Stronghold," The End," and "Fallen Hero") dominate the lyrics. On a deeper level, the album also reflects our own desolate society. "House of Sorrows," "No Tomorrow" and "Für Dich" are much more personal, taken from the band's own experiences and observations.

Funker Vogt uses new elements throughout the album. The band is anxious to see how their fans react to their new sounds. The direction of Funker Vogt's music will be determined by the success of "Navigator." Depending on how the fans react, Funker Vogt will decide what they will do for their future releases. Songs like "Vorwärts!," "Starfighters" and "No Tomorrow" use the guitar in a more pronounced way, while other songs like "Reject," "Navigator" and "House of Sorrows" are somewhat of a departure. Funker Vogt still brings some of their signature sounds to their fans on this release and its up to them to decide if they prefer Funker Vogt's newer sounds over their older ones.

Funker Vogt's future role in music will be determined by the success of this CD. A new era has arrived and "Navigator" will show the band their way on the upcoming journey.

After a few years of silence Gerrit Thomas and Rene Dornbusch enter the dance floors of the world again, accompanied by none other than singer Chris L. (Agonoize/ The Sexorcist) on the microphone.

Hard-hitting and merciless as ever Funker Vogt will attack the dance floors with catchy dance tracks again.
Everybody who has seen Chris L. on stage before knows what to expect. Funker Vogt will perform an incredible redesigned live show. The band is ready to conquer the stage again, to turn them into battlefields. When the bass roars and explosions shake the earth, everybody will know that Funker Vogt is back in town!
The first sound-attack will start in the middle of May with the release of the new hit-single “Der letzte Tanz“. The brand new album “Code of Conduct” will be released early in June.
Both titles will be available worldwide via RepoRecords.
Both releases will be available in a limited edition with special packaging and bonus-tracks.
Fans should better be quick to get one of the limited versions!
Funker Vogt 2017, stronger than ever before! - Order: Dance! – and everybody dances along... 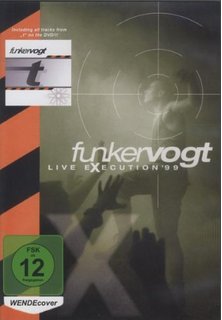